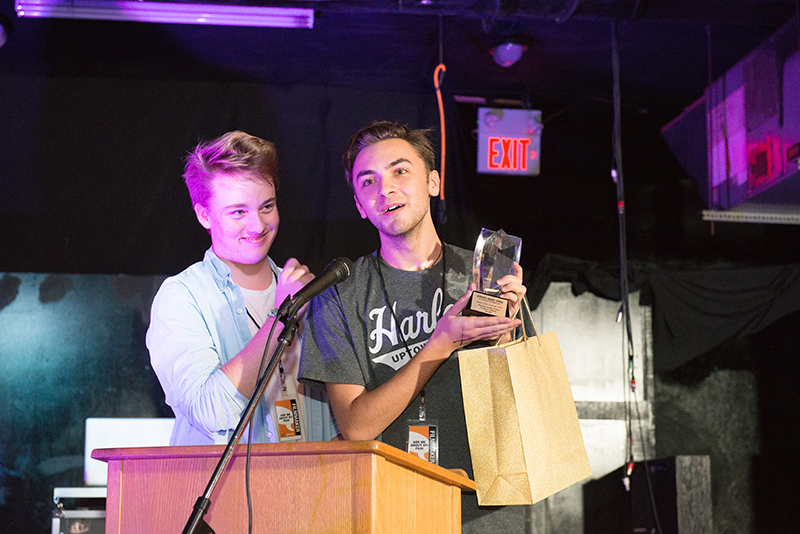 This year’s Short Film Competition was a record breaker for BFF, receiving over 2700 submissions from across Canada and around the world. The resulting shortlist from this torrent of cinematic talent was nothing short of outstanding. Following the short film showcase we held the the awards ceremony and Filmmakers Party across the street from the Uptown Theatre at Fifty West in Mavericks Music Hall. Great tunes from DJ Casey George, as always Casey kept us dancing and grooving all night. Our delicious menu was catered by Made in Mexico Barrie, Lazy Tulip Cafe, Grilled Cheese Social Eatery and Cakes by Design. Such a fantastic night celebrating so many incredible filmmakers! And also to our guest presenters Amanda Dyke, the City of Barrie Cultural Department, Apryl Munroe, This Kinda Life and Dr. Michael Dove, sponsor of the Simcoe Category Awards. “What a fantastic year for our (not so) little Short film showcase! 2700 submissions came in from across the globe in 2016, making for a long yet rewarding process of getting to pick the best of the best. We were particularly excited to see that so many local filmmakers came back this season with exciting and creative films, a sure sign that the stable of talent in our own backyard continues to deepen. Can’t wait for next year!” Stu Lynam, BFF Short Film Competition

CONGRATULATIONS TO ALL OF OUR WINNERS:

Our Shorts Showcase is generously sponsored by Gluskin Sheff, with awards supported by Dr. Dove and Simcoe Audio Video