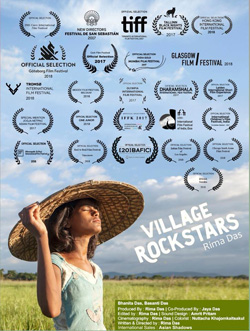 “Village Rockstars is confident and sincere, its story unfolding at a languid but controlled pace.” – Barry Hertz, Globe and Mail

“Village Rockstars is heartbreaking and uplifting in equal measure.” – Renuka Vyavahare, The Times of India

“The atmosphere of Village Rockstars is so real that it almost feels like a documentary. Rim Das’ direction is the opposite of fussy, allowing the characters and their actions to breathe on screen in a way that speaks to her affection for the subject.” – I Hurtado, ScreenAnarchy

In a small village in northeast India, 10-year-old Dhunu dreams of having her own rock band. Her vibrant spirit, imagination and self-assurance stand out in a world where girls are expected to be timid and submissive. She is a free spirit living in remote Assam, firmly believing in the power of her big dreams. She always wished to own a guitar and is focused to form a rock band with the boys in her village of her own, remaining undeterred in a society that threatens to pull her back.

Awards: Winner of over 54 International Awards!